In a previous post we have discussed an example of how to perform text classification in RapidMiner, and we used a data set of film reviews against several word vector schemes to classify documents according to their overall positive or negative sentiment. In this tutorial we show how to look for better results by using RapidMiner's parameter testing feature and evaluate the effects of feature selection to the original classification scheme.

Parameter Testing
There are many factors that come into play in determining the performance of a classification task: for example, tuning parameters on the classification algorithm, the use of outlier detection, feature selection and feature generation can all affect the end result. In general, it is hard to know a priori which combination of parameters will be the optimal one for a given data set or class of problem, and testing several possibilities of parameter values is the only way to better understand their influence and find a better fit.
The number of combined possibilities on how to tune a classification task however grows fast and testing them manually can become tedious very quickly. This is where parameterization can help. On RapidMiner, under Meta -> Parameter operators, we'll find several parameter optimization schemes:
And also algorithms that implement more sophisticated parameter searching schemes:
Feature Selection
We would like to test the effect of feature selection to our previous sentiment classification experiment. Recall that our word vector for the sentiment classifier generated some 2012 features based on unigram terms found in the source documents, after removal of stop words and stemming. Now, we can apply a scheme for filtering out uncorrelated features before we train the classifier algorithm.
Step 1 - Attribute Weighting and Selection
RapidMiner comes with a wealth of methods for performing feature selection. We extend the sentiment classification example by using a weighting scheme to attributes on the feature vector. Then, the top K highest weighted attributes (which we hope are the top most correlated to the labels) are chosen for training a classifier algorithm.
We introduce a pre-processing step to the training algorithm by introducing 2 operators: 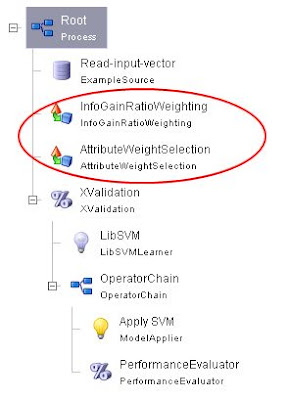 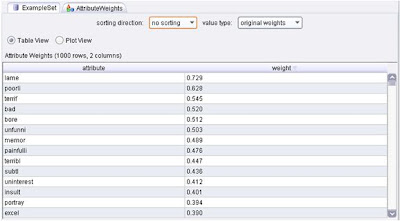 For those interested in reading on some of the subjects briefly touched upon in this tutorial, there is a good discussion on the topic of parameter search in the context of data mining on the book Principles of Data Mining by Hand, Manilla and Smyth.

Feature selection applied to text mining has been investigated by a number of authors, and a good overview of the topic can be found in the work of Sebastiani, 2002 (retrievable here).

Finally, an approach that uses feature selection techniques to the problem of sentiment classification can be seen in the work of Abbasi et al, 2008.
Posted by Bruno Ohana, Dublin, Ireland at 9:36 PM